Now, here’s your opportunity to get to know a little better the men and women who have willingly said “yes” to being a part of our day in a special way! 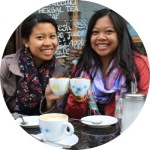 Jamie Fernandez • Maid of Honor
Always laughing and cracking jokes, I like to find the positive in everything. I’m a registered nurse, love arts and crafts and enjoy cooking. My family and friends are close to my heart and I don’t know what I’d do without them. I’ve known Faye since birth. We grew up together in Maryland sharing the same friends, same schools, sometimes same outfits (haha), and the same family – we’re actually cousins! Although I live in Texas now, distance doesn’t stop us from talking. Catching up by phone and FaceTime or visiting in person is always so fun, and we pick up right where we left off. I met Jon a little after Faye met him, and right away I knew that eventually, they’d be together. Their love for each other can easily be felt by those around them and through the years as I’ve been able to be a witness to their relationship, their love only gets stronger. I am absolutely thrilled to be a part of Faye and Jon’s big day and cannot wait until we all get to celebrate this love.

Carmela Dela Cruz • Bridesmaid
Howdy! My name is Carmela Delacruz and I am the baby girl of the Delacruz cousins, but most importantly I am the favorite cousin of my dear Ate Faye. I met Ate Faye a long long time ago, 18 years to be exact, I don’t remember much about those times but as I grew older Ate Faye was always there for me to look up to and to follow by her example. She’s been one of my bestfriends and never treated me like I was a baby, other than telling me to stop growing up. Kuya Jon, I met years ago as well, but the moment I remember first is the time of the first rehearsal for Ate Faye and Ate Jamie’s debut. I remember going up to him and just saying, “Hi future cousin-in-law,” so yes, I saw the future. I’m so happy for the two and I know that they will live a happy life as a husband and wife. I love you both!

Jo Ann McLaughlin-Klemencic • Bridesmaid
Hey all! My name is Jo Ann. I have known Fatima since the spring of 2010. I met her as a group of us were preparing to go to the Holy Land. It was during that trip that Fatima and I became very close friends. I always joke that there is certainly no better place to begin a friendship! Since then, our friendship has continually grown and been such a blessing. After college, while we were both doing a year of service, she was such a source of inspiration and strength for me. It was also such a comfort to have a close friend going through something similar. I then went on to grad school in Boston while Fatima continued on in ministry. Even though seemingly different on the surface, our experiences still matched up in a way that to me just was God’s way of saying that our friendship was meant to be. When I became engaged to my now husband Jake, Fatima was one of the first people I called. She played such an important role in our wedding preparations, and I am honored now (hopefully) do the same for her. I am beyond thrilled for her and Jon. I pray that both Jake and I can be helpful to them in any wisdom we may impart and that our friendship as couples may continue to grow. I know that I am so grateful for all God has given me, and so many others, through Faye Baby! 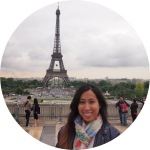 Vania Dienzo • Bridesmaid
My name is Vania. I call Oxon Hill and the DMV area my home. I am an IT professional, volunteer youth minister, catechist, foodie and adventure seeker. Most recently, I became one of Fatima’s bridesmaids! I met Fatima when we were little flower girls or angels for feast days at our home parish St. Columba. We became friends in high school through CFC­-Youth, where I also met Jonathan. After her debut, Fatima and I rarely hung out during college because we were at different schools. A year after we graduated she asked if I could volunteer for her at St. Agnes Youth Ministry. The opportunity opened a different side of the Church to me and it was wonderful to minister to youth alongside the both of them. God surely allowed us to grow closer as friends over meals, movies and adventures and I am so grateful for that. Fatima and Jonathan have not only been great blessings as friends to me but also models of faith, love and perseverance. Christ is the center of their relationship and I am so honored to witness their promises to each other before God in the Sacrament of Matrimony on May 30th! #perestorninos2015 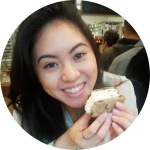 Hello family and friends of Fatima and Jon! Looking forward to celebrating this happy couples BIG day with all of you. My name is Frances;   I am in the works of creating my own flower business. I work as a corporate event planner for a company called IDEA.  I recently got married in April 2014 to my most loving husband by the name of Chris. We have two beautiful fur kids named Kikko a black lab/shar pei and Korree the corgi.

As Faye was a bridesmaid of mine (an AMAZING one too), it is so very exciting that we’ve now both switched roles. Faye and I met at a YFC (Youth for Christ) gathering on our summer before starting college. We’ve been sisters since our interior design years at Marymount. A happy world would not exist without her in my life and now that Jon has so quickly become a part of mine and Chris’.. we can’t wait to be married couples together. Trips, dinner dates, and … children! haha. May the Lord continue to bless them all the days of their lives.

I grew up and am currently living in Stafford, VA. I went to Virginia Tech (Let’s go Hokies!) I commute (well slug) over 90 miles a day to my office in Washington, DC. I am sportsfanatic!! Play football twice a week, and seasonally play soccer, softball and dodge ball. I also love the Redskins, Flyers, Nationals and Wizards. My favorite (used to be) genre of movies is suspense/horror/scary, Favorite season is Fall, and I love Food! I met both Faye and Jon in high school through Youth for Christ, and it was a wonderful blessing to have known them during this time. As young adults we are typically naïve to the meaning of true love, but they were the exception. Watching them conquer the long distance and temptations for many years, but most importantly keeping God first in their lives, made me optimistic that I too would have a relationship like theirs one day. Jon and I became really close friends (biffs) during the last night of the YFC Conference in Houston, TX. We were both accommodated by the same host family and we stayed up all night talking about sports, One Tree Hill, our family, but most of the time he talked about Faye. The way he eloquently spoke about her, I just knew that they were meant for each other—no matter what… When they first broke up it was a really difficult period for Jon, and I knew that now more than ever he needed someone to remind him why he should not give up, because true love waits (1 Corinthians 13:4). So, it was to no surprise that God led these two back into each other’s’ lives, and I can’t wait to witness their fairytale ending in May!

Jarell Perez • Best Man
I was born 5 years after jonathan perez. to the same parents. In a different country. That’s how I know him. He’s my brother. She’s his fiancee. That’s about it. Haha. Sike. My name is Jarell Perez and I am a junior at Old Dominion University.
Jeremy Perez • Best Man

Darius Imperial, Jr. • Groomsman
Dj Imperial has aspirations to become Hokage. This brave young warrior has been through many adventures and won many battles through the years. On a path to success, he has inspired others and learned important life lessons from the many who were also on their path of life. With all the challenges that have helped him gained the experience to help him get to the new chapter in life, he has embraced everything for how it is and continues to enjoy it. With the help of his beloved family and friends, the sky is the limit for Young Darius; believe it! Dj Imperial had met Jonathan Anthony in his younger years; an instant bond was form for they were family. Although Dragonball Z and basketball were the foundation of their friendship, their bond runs deeper than just fun and games. They were related by blood and have become lifetime friends with many great memories. Dj met Fatima during an YFC camp. She was wearing Air Force One’s, as they were popular at the time. She was a positive girl and perfect for my cousin Jonathan Anthony. Dj always thought these two would work, and it just turns out, they do! 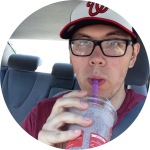 Why hello there!  My name is Phillip Foster and I am an IT student, an employee of the Federal Government, the cousin of Faye and the neighbor and soon to be cousin in law of Jon!  I love to eat (something that’s quite common amongst the Dela Cruz clan), cook, pick things up and put them down, allow my legs to take me wherever my mind and heart desire, make people laugh, laugh myself, and most important of all, family.  I have known Faye my entire life.  She is my ate paypay, even though for a little bit I’m pretty sure I was the kuya (MARCH COMES BEFORE MAY, THAT MEANS I’M OLDER!)  I always saw Faye as one of my big sisters and am truly blessed to have seen her grown into the woman she is today.  I have vague memories of when I met Jon because back then I was more interested in Pokemon cards, and Super Smash Brothers.  However, meeting Jon again when I was older I was able to see that this man is the man for Faye.  Seeing the way they look at each other makes me hope that one day, my significant other and I could share the same love for each other the way Faye and Jon do.  I am extremely happy that the two of them have found each other, and I can’t wait for the day that they marry!  Perestorninos2015!!!!!!!  Let’s GOOOOOOOOOOO!!!!!!

Jose Gil-Figueroa • Groomsmen
I am a Vienna, VA native, and I am studying to be a DPT. I graduated from Marymount University. I love music, sports, motorcycling and my girlfriend Marissa. Jon and I were roommates at the Youth Apostles House. A bromance emerged after Jon moved in and we bonded over beer and the Dallas Cowboys. I have the pleasure of seeing how Jon and Faye share not only their unconditional love for Christ but also for each other. I am so humbled to be a part of their special day!